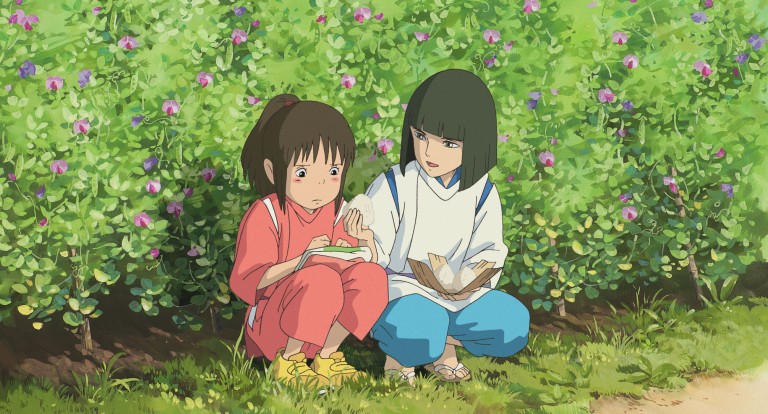 Review of “Spirited Away”

Screw the quote-whore sound of it, Hiyao Miyazaki’s 2001 anime opus is a triumph of imagination. Following a young girl who’s separated from her parents after they unknowingly travel through a portal (that looks like an ordinary tunnel) into the spirit world, it’s a children’s film that for once is about a child. Many animated films are often about adults or anthropomorphic beings with adult personalities. Miyazaki is one of the few filmmakers out there making films about children for children, and without an ounce of condescension to boot. While the movie seems to lose a little something in the dubbed translation from Japanese to English, resulting in dialogue that is sometimes forced, the sheer creativity on display overwhelms any awkwardness. It doesn’t hurt that the spirit world as interpreted by Miyazaki actually feels like another dimension and not merely a heightened version of Earth, featuring talking frogs, walking soot, toasted newts, and a lonely, mute spirit whose humility is nearly vanquished by contact with chemicals. It’s a universe that truly plays by its own rules, and that’s refreshing in a business where originality is slowly eking away.

P.S. Thank you, Sarah Olivares, for your insight.

I rented this because Redbox has a delayed release pattern and therefore “A Million Ways to Die in the West” isn’t yet anywhere to be found at the local neighborhood 7-11. “Sex Tape” is about as bad as you’d expect. Despite a talented cast, the movie’s a dud, both as comedy and as romance. The script is riddled with cliches (Segel and Diaz have to re-discover “the reason you started fucking in the first place”) and nearly every attempt at giving its audience the feels lands with a thud. It’s the sort of film that believes a character naming off a checklist of strange, quirky-sounding porn sites is shocking and therefore automatically guffaw-inducing. Whether due to his own failings or due to having to bounce off of Diaz’s mediocre comedic talents, Segel’s timing is off, and such performance flaws lead to a genuine lack of chemistry between the two leads. It doesn’t help that the characters are consistently placed in situations that stretch suspension of disbelief, such as a climactic scene where Diaz snorts cocaine in order to impress the CEO of a company, or when Segel is nearly blackmailed by his best friend’s son. As said best friend, Rob Corddry provides a few laughs, but it’s too little too late.