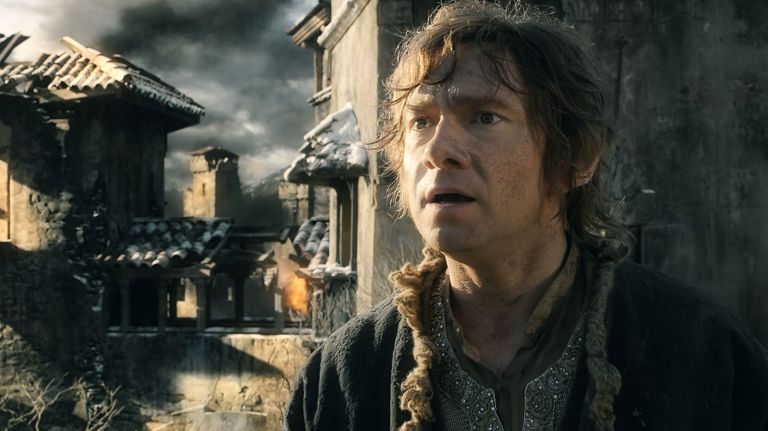 The conclusion of Peter Jackson’s fantasy saga is a rollicking adventure that combines the character development of the first Hobbit film with the action sequences of its fiery sequel, but comes up mostly hollow in matters of the heart. It doesn’t help that Jackson seems to be coasting on plot beats similar to his previous films and, above all, relatively rote dialogue when stacked against the Lord of the Rings trilogy or even the first two Hobbit pictures. Nevertheless, a sweet romance’s denouement, one of the grandest battles of Middle Earth lore, and a final farewell to Bilbo and company overcome these otherwise distracting contrivances.

“Battle of the Five Armies” brings the inevitable attack on Laketown by the dragon Smaug, the throning of Thorin Oakenshield, and yes, five different armies coming to a head upon the Lonely Mountain, each with their own reasons and motivations for wanting it or something inside it for themselves. More than anything, the film emphasizes once more the drunken stupor of madness that powerful gems in Middle Earth seem to wreak upon their owners. In “The Lord of the Rings,” it was the One Ring, of course, and its hold over both Frodo and Gollum. Here it’s bowels of gold and a shiny Arkenstone that have nearly demolished Thorin’s conscience, and though it provides for a deeper examination of Thorin’s psyche, this is well-tread territory when it comes to Middle Earth. Large-scale battle scenes are too, but not like this: the Dwarves of Durin, led by Thorin’s cousin, the Woodland Elves, led by the chilly Thranduil and backed by Legolas and Tauriel, the people of Laketown, led by dragon-slayer Bard, and the dual Orc armies of Azog the Pale and Bolg. The Orcs want the mountain for its strategic location in waging a new war upon the people of Middle Earth, Thranduil wants some vaguely special star-light gems that lay inside, and the Dwarves naturally want to reclaim their homeland. These conflicting goals meet in what is perhaps the best choreographed action sequence of the year, with each army and each character and each location distinctly conveyed throughout the entire climax, not to mention the various forms of combat themselves. This particular installment doesn’t exactly destroy the tear ducts, but it can’t be said it was for lack of trying. A sweeping score and a multitude of shocking fates are obviously meant to affect the audience in a manner of tragedy, but with the exception of the closing scenes, and Tauriel and Kili’s ongoing affections for one another, attempts at emotional resonance fall flat. No matter, because Jackson’s attempts at making us stand and cheer are a many and, for the most part, he succeeds with flying heads. Indeed, the number of decapitations here that prompt a cheer or two has to be a record. It’s easy when it’s Orcs, I guess. Fortunately the filmmaker seems less interested in silly comedy this time, because when he does it’s some of the worst celluloid he’s ever conjured, revolving around an annoying coward of a character named Alfred who comes close to Jar Jar Binks territory. What’s worse is he doesn’t serve much of a purpose outside of representing the worst of man’s greed. In the end, he’s quickly forgotten, and interesting codas featuring Saruman (“Leave Sauron to me”) and Legolas (“Go to the North. There is a member of the Dunedain you should meet and stay with”) provide an exciting segue to “The Lord of the Rings.”

It’s too bad that many have sworn off this franchise since “Return of the King,” because when the battle’s over, and the future’s been written, and Bilbo returns to his empty home in the Shire, it suddenly dawns that this may be the last time we see these beloved characters on the big screen. Young Bilbo staring at the One Ring becomes older Bilbo staring at the One Ring, and then comes the knock of an old friend. Ultimately, that’s what “Battle of the Five Armies” counts for, one last chance to say goodbye to the old friends audiences have grown to love. It may not be the greatest farewell, but it’s at least the farewell Middle Earth deserved.