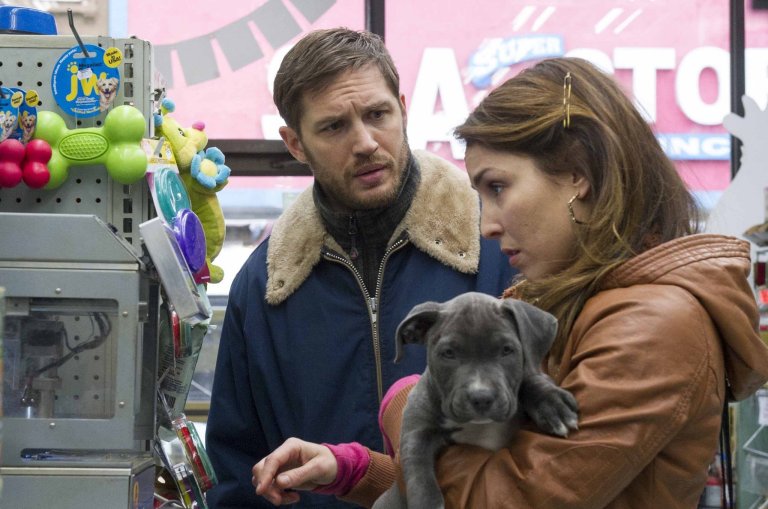 “The Drop” approaches the realm of personal statement at times, not by the director, but James Gandolfini. The one and only Tony Soprano is done with the hurt business, that is, portraying the colorfully badass (or just bad) mob figures in mob movies and television shows. “True Romance,” “The Sopranos,” “The Mexican,” “All the King’s Men,” “Killing Them Softly,” and “The Drop.” That’s a laundry list of criminal deeds, and his role in “The Drop” represents an appropriate swan song to such a storied career. Gandolfini plays Cousin Marv, a bar owner superseded by the Eastern-European crooks running his corner of town these days. He used to be something, but now he’s just a lowly courier, running one of many joints that operate as “drop points” for dirty cash. Tom Hardy, the real star here, is the unassuming bartender with a history, a history with Marv, a history with the hush-hush horrors of these economically desolate surroundings. This isn’t so much a mob movie as it is a movie about those people after their wise guy days have long since past. Gandolfini’s Marv longs for that status again, his seat at the bar that no one touches, his place in the bloody hierarchy. Now his seat is taken by a drunk old lady, his place erased by tougher, meaner neighborhood cats who don’t hesitate like he did. His dreams, maybe his memories too, are delusions, as Hardy’s Bob reminds him in one crackerjack scene. “It was just a stool,” he tells him, referring to that cherished throne in the bar. Hardy is an actor who conveys so much with so little, and he proves once again why he’s one of the best working actors today. Gandolfini pours his heart into Marv’s grumpy heartache, giving audiences one last glimpse of greatness alongside a man who buoys it at every turn. Noomi Rapace doesn’t fare as well as Bob’s skittish, but kind neighbor, an underwritten role whose purpose is sketchy till the last scene. She’s a woman scarred, both physically and emotionally, by the men in her past. One of those men shows up at the half-way point, bringing unwanted unease into Bob’s life, claiming himself the perpetrator of a townie murder mystery, but himself the victim of his own delusions by the end. “The Drop” is a simmering sort of thriller, where suspense creeps up on you amidst quiet conversations and limited action. It’s a story about the fantasies of men who feast on notoriety, but haven’t quite attained it. And above all, it’s a fitting send-off to a late, great character actor.

David Cronenberg’s “Maps to the Stars” is a similar story, where characters of grandeur must come to terms with their own outsized shortcomings and repressed memories, but don’t. Hence the delusions. Julianne Moore is aging once-starlet Havana Segrant, a grown-up Lindsay Lohan if Lohan had been somebody for a little while longer. She’s desperately clinging to an acting career on the down-slope, and a long-ago tragedy that haunts her isn’t helping. If Cronenberg had honed in on her harrowing neuroses alone, the movie might’ve been onto something. However, he’s also intent on sending up the supposedly sick and twisted secrets of Hollywood, as well as exploring the fucked-up upbringing of two children of dynasty. Well, he’s late to the party. Every joke or non-joke, and they’re mostly non-jokes due to Cronenberg’s complete lack of knack for comedy, feels dated by a decent ten years. It’s a naively cynical take on a world that’s always pegged as soulless, and the always part is why this satire has nothing new to say. A disjointed narrative and Cronenberg’s typical weird talking points (looking at you, bi-sexual three-way and gratuitously violent death scene) throw wrenches into what might’ve been a sincere portrait of depravity, but the director’s unconventional quirks work against him here. Moore is resolutely delicious playing such depravity for once, obviously relishing the chance to be mean and manic, and young Evan Bird nearly steals the movie in a surprisingly mature performance as one of those fucked-up children, a brat of a child star named Benjii with mommy, daddy, and sissy problems. That sissy is played by Mia Wasikowska, an actress game for the challenge, but exactly what that challenge is never becomes clear. Agatha Weiss is an erratic character, and not in a correctly crazy way. She behaves one way or another depending on how loony the script wants her in one scene or another. She’s not the only one. Take, for example, Robert Pattinson’s wannabe actor/limo driver, a character who calls Agathy “crazy” in a diner, implying he has no interest in dating this girl, and in their next scene he’s following her to the Hollywood sign for a kiss under the stars. The movie plays this game of hop-scotch throughout, with motivations, behaviors, even thematic material. Why are Benjii’s waking dreams haunted by dead children? Why does Havana turn on Agatha, her assistant in training whom she nominally befriends? The general gist of “crazy” isn’t enough to explain the unexplicably odd going-ons in this filmmaker’s warped version of the business. The true delusion is Cronenberg’s, believing there was still life left in this most seedy of sub-genres. “Maps to the Stars” is weird to a fault.