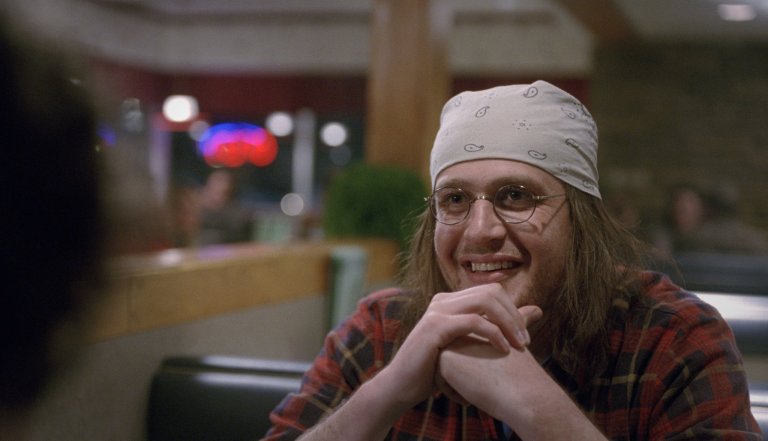 The End of the Tour is a fly-on-the-wall sad time with two insecure writers engaging in scintillating conversation over the course of four days, when Rolling Stones journalist David Lipsky traveled to the mid-west to interview the inimitable David Foster Wallace, the late, great novelist who gained fame in the mid-90’s and later committed suicide. It’s a tale of two men seeking acceptance from a changing world through their written words, their similarities only serving to highlight their differences as the days wane during their short journey together. Wallace disdains the fact that he seeks fame and attention, constantly denigrating himself to approximate normalcy. Lipsky, as quiet and squirrelly as he is, has no qualms about the acclaim hopefully coming his way, if he can only nab some time in the spotlight. Thus, the film is a back and forth game of subtle one-upmanship as these two men debate and pontificate on their careers, their predilections, and their own crazy neuroses, sharing a bond that will inevitably break, whether due to the former’s depressive nature or due to the latter’s sometimes unscrupulous ways. As Wallace, Segel gets to show off his heretofore untapped dramatic gifts, waxing poetically pessimistic on American culture and society in expressive monologues on more than one occasion. But the film isn’t so much about American culture as it is a man at odds with his surroundings, except perhaps when he’s dragging on a cigarette and playing with two dogs at his snowed-in Illinois enclave. As writers are often depicted, stereotypically but truthfully, Wallace is uncomfortable with his good fortune. During an early conversation with Lipsky, when he describes a particular form of “paralyzing” self-consciousness, it’s quite apparent he’s referring to his own propensity for questioning everything, including himself. Eisenberg’s Lipsky serves as the audience proxy, befriending this teddy bear of a man whilst trying to maintain his journalistic remove, but calling him out on his egotistical gymnastics when the moment calls for it. The End of the Tour is more of an intellectual exercise than an emotional one, and I can’t speak to whether it’s an accurate portrayal of the literary legend, but it’s not at all cold and inaccessible. It’s a funny and poignant examination of loneliness through the prism of a troubled artist, and its two stars are captivating because of their ability to so acutely convey their characters’ flaws.