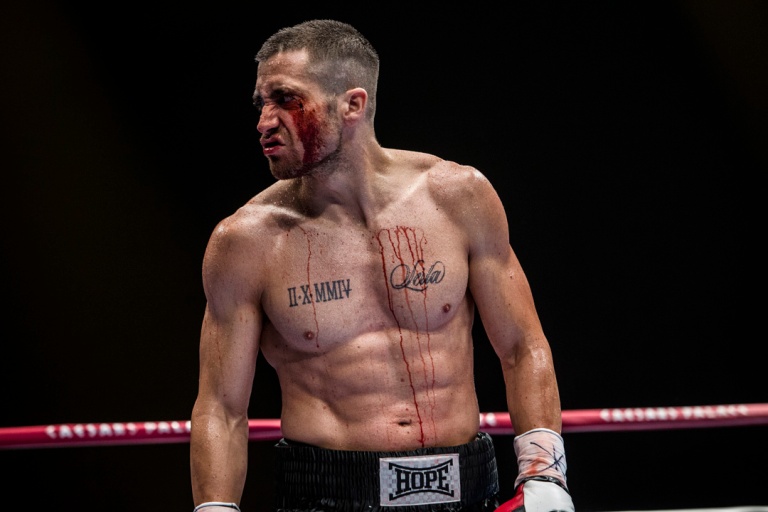 “Southpaw,” Antoine Fuqua’s fictional boxing pic, would be a helluva lot better if I weren’t a fight fan. But I am, so I notice things. I notice the exaggeration that is a gaggle of camera-flashing reporters crowding the hall outside a famous fighter’s locker room, an iconic scene no longer witnessed in the real world of boxing. I notice the absurdity of blood still pouring from hero Billy Hope’s mouth in said locker room, as if doctors don’t tend to that after a huge WBC title fight. I notice the relative lack of importance placed on the “southpaw” stance, an obvious blunder considering it’s the title of the movie. It’s the little things that count when auditing the authenticity of a sports drama. For whatever reason, from “Warrior” to this, Hollywood doesn’t have its finger on the fight game, but Jake Gyllenhaal does. He’s got the physique, he’s got the aching shuffle and that late-career stammer, punch-drunk from a life of too-little defense. His performance elevates an otherwise generic comeback story, ditto Forest Whitaker as his trainer and mentor following Hope’s fall-out with a money-hungry manager (50 Cent). Fuqua directs with gritty panache, perhaps too much, sometimes approaching that area where the edginess is no longer authentic, wallowing in melodramatic misery versus exploring genuine matters of the heart. That melodramatic misery still packs a punch though, for this grown man couldn’t help certain feelings felt when Hope’s wife is accidentally shot in an early melee, or when Hope can’t get out of his own way to care for his young daughter. “Southpaw” can’t sustain it, however, allowing nu-metal lyrics like “I’m a motherfucking beast” to interrupt those tender moments. Curious choices abound, such as casting a Mexican actor to play Hope’s Colombian rival Miguel Escobar, or the death of a minor character whose absence accomplishes nothing. There are inconsistencies too, like Escobar’s transformation from a benevolent shit-stirrer to a hateful douche in the blink of an eye. Again, Jake Gyllenhaal’s physical transformation diverts attention. While not quite up to the standard set by his performance in last year’s “Nightcrawler,” his Billy Hope is a bruised wildebeest, a guy who met the love of his life as a child in the system, and now slurs his way through life, lost, his daughter the only thread keeping him afloat. Even with cliches and inaccuracies, “Southpaw” is effective when speaking from the heart.

“Unfinished Business” is a blatant attempt at kick-starting another bro franchise like “The Hangover,” but it fails miserably, combining what feels like an unfinished script with three talented actors in the hopes that magic happens once again. It doesn’t. Vince Vaughn, Dave Franco, and Tom Wilkinson have little to no chemistry, each bringing a wildly different flavor to the proceedings, and director Ken Scott’s lack of comedic timing doesn’t help in stirring that pot. They’re simply incongruous. The film’s biggest problem is a preoccupation with the familial foibles of Vaughn’s character, not just a cliche but an annoying distraction from the dirty jokes we came for. He’s a workaholic and doesn’t have time for his kids, and in his absence they’ve succumbed to bullying in different ways. However trite this typical subplot may be, it does lead to a single effective joke: Vaughn’s hotel room in Germany is actually a museum, a stark room with wall-to-wall windows where European patrons stroll by to view the joyless existence of “American Businessman 42.” Vaughn phones it in for the fifth, sixth, maybe seventh time in as many years, and Franco and Wilkinson do what they can to enliven underwritten roles, but the former’s slow-witted character is borderline offensive if he’s meant to be mentally challenged. Some of the seedy shenanigans they get into after nightfall are memorable, but not altogether original, a mishmash of wheelbarrow sex, molly-induced raving, and pillow fight buffoonery. These antics are short-lived though, as Scott seems inexplicably more interested in the hunt for a handshake (apparently the cornerstone of a done deal in this corporate world) than he is sexual repression unleashed. Additionally, he throws in a random culture clash between Berlin authorities and protesters decrying the G8, a bit of background chaos that only serves as one last, unnecessary obstacle to the handshake these craven Americans so desperately crave. “Unfinished Business” isn’t the worst movie of the year, but it comes damn close.