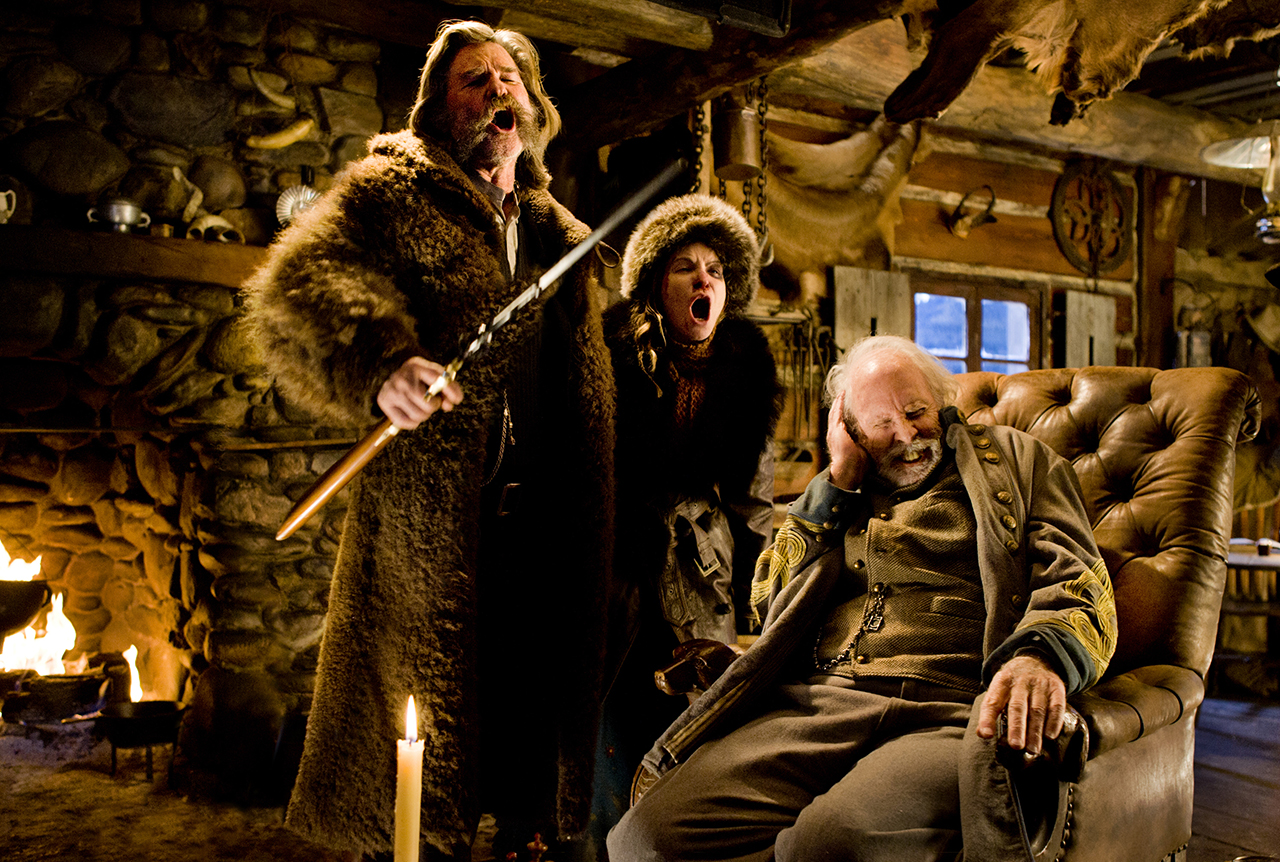 I’m an unabashed fan of Quentin Tarantino. His brand of garrulous dialogue and tawdry sermonizing is just my cup o’ tea, especially when it’s slowly poured. “The Hateful Eight,” for all of its masterful strokes, and there are many, has duly tested such fandom.

Resembling a stage play, his revisionist western is also an intimate chamber piece, mostly confined to a stagecoach lodge where eight strangers (or are they?) have huddled to escape the growling blizzard out yonder. Through the squinting eyes of Major Marquis Warren (Samuel L. Jackson), a black bounty hunter and former Union soldier, John “The Hangman” Ruth (Kurt Russell), a gruff, by-the-book hunter himself, and Chris Mannix (Walton Goggins), a would-be sheriff and the redneck son of Confederate legends, Tarantino pitches a thriller of racial animus rivaling “Django Unchained” and reflecting “Black Lives Matter.” The battles have ceased but the Civil War is still being fought according to these splintered factions of Minnie’s Haberdashery i.e. the Divided States of America. Or maybe I’m giving the filmmaker too much credit. The coiled verbiage often curls in on itself, refusing to amount to much besides indulgent ruminations on frontier justice and whodunnit resolve. Anachronistic songs and a deftly orthodox score by the great Ennio Morricone ring true, even when those elaborate conversations do not.

It’s a credit to DP Robert Richardson, lensing in glorious 70mm film, and editor Fred Raskin, conjuring interminable suspense from an incredibly slow burn, that “The Hateful Eight” is so enrapturing for the first two and a half hours. Richardson’s finely grained images and Raskin’s corkscrew polishes keep the audience on their toes, inspecting the nether margins of their screen for beautiful clues and transpiring conspiracies. Jackson is deliciously unrepentant as the bounty hunter with a chip on his shoulder, and Russell evokes John Wayne if a John Wayne character were a real, albeit exaggerated human being, not the idolized cowboy some knew and loved. Ruth has brought the infamous Daisy Domergue (Jennifer Jason Leigh) for future hanging, and nothing will stand in his way, ‘cept perhaps Daisy herself. Leigh rises from recent obscurity to lick her bloody chops as the villain in waiting and the victim of a torrent of abuse from all sides. But it’s Walton Goggins who comes out spit-shining, portraying a lost soul still coming to terms with a lost cause and unconditional surrender. The sheriff’s hillbilly surprise belies a wayward sorrow, his purpose in life suddenly requiring redefinition in this new world where a black man can walk up to a southern general (Bruce Dern) and demand recognition.

A nebulous ending hinges on who the white Mannix trusts more: a black man or a woman? If Tarantino’s intent involved a subtle and simultaneously garish tableaux of mankind’s complicated divisions, then applause does not suffice for what he’s attempted. However, subtlety hasn’t always been his strongest suit, and any sermonizing is eventually lost in a violent orgy of sadism, nihilism, and many more -isms during the last half hour, the controversial director’s trademark violence here undermining and overshadowing what he might have to say about race, gender, or justice. The key word is might. I couldn’t tell, and it wasn’t for a lack of paying attention.

One thought on “The Hateful Eight is Hard to Love”