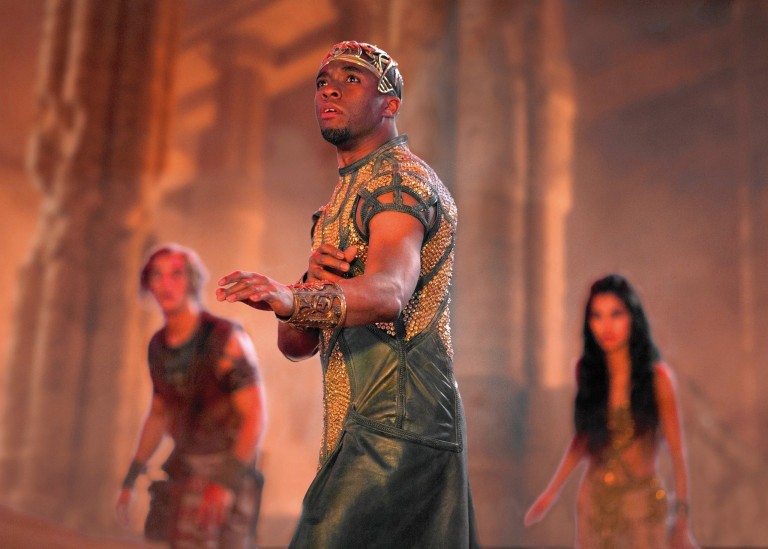 The latest example of Hollywood white-washing, “Gods of Egypt,” doesn’t succeed or fail on the merits of historically accurate casting or a lack thereof, but on the backs of a team of visual effects artists who seem to be working overtime, and to no avail. Alex Proyas, once an intriguing purveyor of striking dystopia like “Dark City” and “I, Robot,” is out of his element here, unable to assemble a cogent fantasy adventure.

There are striking images, most notably their depiction of the sun god Ra (Geoffrey Rush) wrangling his burning star over flat Earth’s horizon. That’s right, planet Earth is flat in “Gods of Egypt.” It’s kinda cool, there simply as a token reflection of ancient Egyptian beliefs. Nevertheless, that homage and others are stark reminders of this director’s knack for pretty pictures. His grasp of character and plot is far more precarious unfortunately, with a fairly predictable megalomaniac (Gerard Butler) threatening not just all of humanity, but all of reality for…I’m not sure. Set, god of the desert, raves about re-shaping the world in his image, and details aren’t important, I guess. Like all “historical” epics, there’s family treachery at hand. His reign as king of Egypt, stolen from his brother through bloodshed, begins with a hostile takeover and ends with heroic nephew Horus exacting his revenge. It’s not really a spoiler to say the good guys win, right?

Minus the incest, and maybe with a touch more humility, Nikolaj Coster (I refuse to write his full name) basically reprises his “Game of Thrones” character as the god of the sky, taken down a peg or two when Set takes over and thrust into hiding, only to resurface when Beck, annoying young protagonist, beckons him to fight. As the youngling, Brenton Thwaites is thoroughly the worst actor on deck, if also thoroughly harmless and temporarily endearing. An early scene posits him in the middle of a booby-trapped journey to thiefdom. With nothing but acrobatic prowess and pure cunning he bobs and weaves through a string of deadly obstacles, making for the most entertaining sequence of the entire picture. Elodie Yung is perfectly exotic as Hathor, goddess of love and love interest of Horus, of course, and Butler plays another dull variation of his vaguely-accented tough-guy persona, only this time he’s evil. Stealing scenes is Chadwick Boseman as Thoth, god of wisdom, a cheekily egotistical philosopher and ancient Egypt’s version of a scientist. Boseman carries just the right amount of wink in the midst of talking sphinxes and silly-shiny armories.

Though it doesn’t help, it’s not white-washing that does in “Gods of Egypt,” or even the formulaic plot and two-dimensional characters. It’s the studio’s grave miscalculation to turn a historical epic into a comic book, with superpowers, magical spears, and gaudy CGI warriors battling each other among the ruins they create. And worst of all, it looks like a cartoon when they do. You can still count on Alex Proyas for some offbeat visuals and an exciting set piece or two, but don’t expect much else.