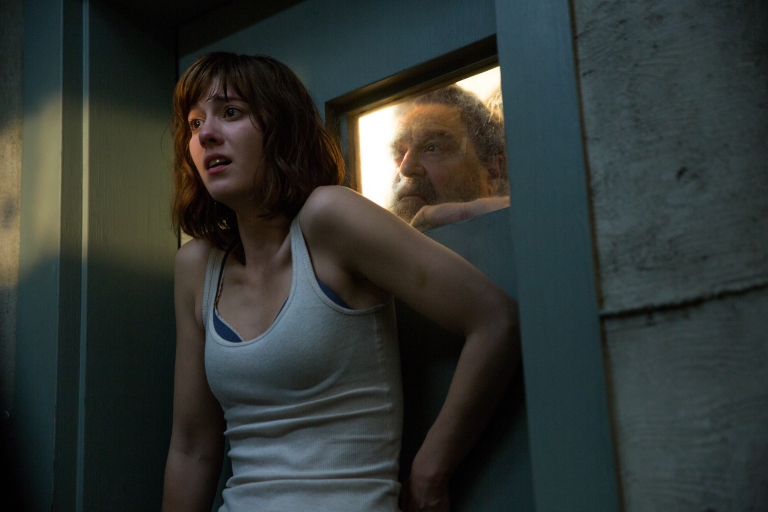 The following might be construed as a spoiler: “10 Cloverfield Lane” is not a sequel to 2008’s viral marketing phenom “Cloverfield.” It’s a taut thriller with a twist bearing no connection to that found footage creature feature brought to you by J.J Abrams and Drew Goddard. In fact, Abrams said as much in a recent interview. I’m not prone to faulting a picture for a misleading marketing campaign, but this went too far.

That’s not to say it ain’t a good movie on its own terms. It is. Mary Elizabeth Winstead plays Michelle, an aspiring fashion designer who, in the midst of running from her problems, is struck by a pick-up truck and taken in by the man who saved her life (John Goodman). Winstead is afforded a wonderful role here after nearly disappearing for years from visible cinema, and Goodman delivers maybe the best performance of his career as Howard, a survivalist nut with good manners and a mean streak. He’s hard to get a read on, a military vet who one minute appears to be a well-meaning everyman with a tragic backstory…and the next he’s a serial liar, petulant behavior portending a man with a palpable ego and a dangerously short fuse. As a comical third wheel, John Gallagher Jr. brings welcome levity to the dinner table, trying as he might to make the best of their shitty situation. He’s an average Joe and an open book, easy to like and quick to trust, a symptom of emotional maturity but less critical thinking compared to Michelle’s paranoid craftiness.

Joining Tim Miller and Robert Eggers as yet another first-timer with promise, director Dan Trachtenberg combines character-driven stakes and claustrophobic staging to mount an intense and inevitable stand-off between captor and captives, where the audience is never quite sure who is manipulating who, and are certainly never sure what exactly Goodman’s character is truly capable of. Mysteries and red herrings abound regarding the unknown above, an “attack” they’re retreating from, a threat the younger survivors are unsure about, all in service of a narrative more concerned with the monster in front of you than it is the monster behind the curtain, and rightfully so. Howard is a man of conviction and a man quick to convict, always on the lookout for betrayal. He’s old-fashioned when it comes to foul language and new-fangled when it comes to conspiracy theories. A third act that nixes psychological nuance in favor of horror movie flavor does his character a great disservice, if ultimately a greater send-off in terms of pure iconography.

That title is meaningless though. Abrams and co. saddled a good film with a facade of baggage when they slapped “Cloverfield” on it. Like myself, many will wander in expecting a sequel or at least a spin-off and get neither. “10 Cloverfield Lane” is a minimalist drama that’ll turn the screws on you in more ways than one, all while suffering slightly under the weight of expectations it clearly brought on itself.