Marvel Studios is often accused of safety, never mind the fact that any comic-book adaptation in 2016 is a safe bet, financially or otherwise. To their critics, they produce superbly palatable if willfully simple blockbusters where the candy-colored superheroics are fraught with an endless stream of pithy zingers and substandard villains. Captain America: Civil War is not only a stirring, globe-trotting action flick, one that dabbles in the apparently “low-brow” exercise of witty dialogue, but a politically and thematically charged potboiler as well. It’s a resounding retort to these criticisms.

In the wake of Ultron’s attack on Sokovia in the last Avengers outing, the world is more leery than ever of superheroes and so-called “enhanced individuals.” William Hurt’s Thaddeus Ross, the long-forgotten mustache-twirling general from the best-forgotten Incredible Hulk, comes calling as the new Secretary of State. He corrals Iron Man, Cap, and friends to sell them on a United Nations proposal: the Sokovia Accords. The world will no longer tolerate the Avengers as a sovereign force. According to them, the fallout from New York, Sokovia, and other assorted disasters involving Earth’s mightiest heroes may call for a new paradigm. These potential vigilantes must be controlled, reigned in when necessary, and thus, political and personal battle lines are drawn when the good captain and his compatriots choose not to sign the agreement.

Steve Rogers, once a perfect soldier and willing tool of the military industrial complex, is now fighting against it. He’s seen enough corruption in the higher ranks to ever surrender his allegiance again, and those higher ranks are now on the trail of his best pal Bucky, last seen in The Winter Soldier forgoing the assassin life to remember who he is and regain those memories lost to Hydra brainwashing and Russian cryo-chambers. On the other side, Tony Stark is a man still atoning for his past mistakes, desperate to right the wrongs that were made in the heat of destruction. Once an individualist wary of hobnobbing with government types, even outright thumbing his glorious brain at them in a Senate hearing (Iron Man 2, anyone?), he’s now willing to play the company man if it means someone will save him and everyone else from his mad scientist ways. He’s seen enough death and endured enough heartache to continue trusting those playboy instincts of his.

Despite the darker canvass, directors Joe and Anthony Russo don’t shy away from the great fun inherent in these characters fighting each other. The much-ballyhooed airport royale is a comic-book splash page come to life. Ant-man vs. Spider-man. Vision vs. Scarlett Witch. Winter Soldier vs. War Machine. Hawkeye vs. Black Widow. It’s a smorgasbord of droll one-liners, creative gags, and visual marvels. Above all, it’s full of surprises, something in short order in today’s superhero-saturated marketplace. It’s also a good example of the Russos’ relative inexperience when it comes to large-scale effects. As well-choreographed as much of the action is, the colors don’t pop and the scenery doesn’t impress. Branagh’s Thor and Whedon’s Avengers had better cinematography, and they weren’t exactly the work of a Deakins or a Lubeski either.

While gray highways and white airports muck up the periphery, the excellent cast anchors the foreground, each given time to shine, many of them delivering their best work yet in the franchise. Robert Downey Jr, for one, is at his best as a humanitarian in mourning. He’s reeling from a possible break-up with Pepper and constantly hedging the consequences of his actions, forever changed he is by events in The Avengers and Age of Ultron. Downey tones down the billionaire chutzpah and it works. Chris Evans again makes stoic look heroic, and cool, and even melancholy. He’s desperate to hang onto Bucky’s friendship, his last connection to the past, and it shows. Standing out from the pack of returning supporting players is Paul Bettany’s Vision, a compelling rendition of intelligence both real and artificial, a “man” approximating the behavior of a man, and with benevolent intent to boot. His burgeoning friendship, and potentially more, with Wanda Maximoff is a wonderfully strange delight. 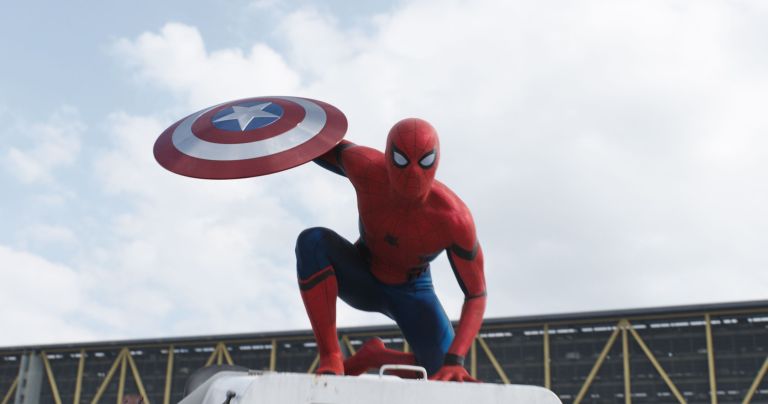 Standing out from the pack of everyone, naturally, are Black Panther and Spider-man. Peter Parker is finally a young kid, not a young man masquerading as a high school student. You’ll believe a fifteen year-old nerd can swing, and quip, and all that stuff. Teenage Brit Tom Holland is pitch-perfect casting. The character himself is a little shoehorned, only there to serve as an extra body for the impending circus, and of course, to set up Spidey’s own solo outing next year. Black Panther, however, is an organic fit, and Chad Boseman plays the African warrior and Wakandan prince with a dashing form of royalty. He’s an imposing presence, and his revenge story doves nicely with Helmut Zemo, the subtle and seriously effective villain played with menacing zeal by Daniel Bruhl. Prince T’Challa and Sokovian blue collar Zemo aren’t cut from the same cloth, yet they’re both out to avenge their family in the midst of historical distress in a fictional homeland.

Civil War never takes a side, and it’s the best decision the brothers make in a movie full of best decisions. Iron Man and Captain America are both right, and that’s what makes their inevitable showdown so thrilling, so wrenching. When Stark’s repulsor beam faces Cap’s vibranium shield, it means something beyond politics, and it’s actually difficult to watch, in a good way. You don’t want either of them to lose. Neither of them would lose if the Russos and Marvel were playing it safe. Believe it or not, one of them does, and they’re not. Steve and Tony don’t kiss and make peace when the dust settles here. There is loss, there is injury, and the introduction of both Black Panther and Spider-man provide more thesis to the ongoing theme of escalation. The Avengers hath wrought a new paradigm themselves. Since the advent of their team, more “superpeople” are popping up than ever before, and the governments of the world have and will continue to respond.

Eight years later, Marvel is still showing us new wrinkles. Civil War may be a safe bet at the box office, but as comic-book movies go, this is no safe picnic on screen. For all of the pomposity about these films being frothy excuses for costumed heroes to make fun of each other whilst destroying buildings left and right, this latest adventure is an answer to all of that. The Russo brothers have crafted a blockbuster that actually grapples with the ramifications of superheroes in the real world, while never forgetting the important ingredients that make this universe the best franchise going. And yes, pithy zingers is one of them.