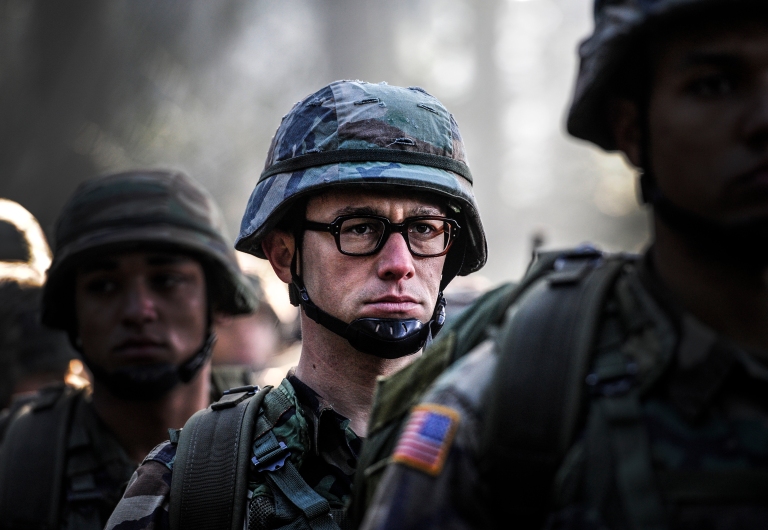 Oliver Stone’s return to form is being hailed as “safe,””pedestrian,” and even “hero worship.” Though the latter may be true in the late goings of a film that actually stars the real Snowden himself in some capacity, I’d hardly call a film “safe” while director, writer, and cast are unequivocally and accurately pointing fingers at both sides of the aisle, Republican AND Democrat, and while staunchly upholding the slowly disappearing act of patriotism that is duly questioning your government.

Aesthetically, Stone ain’t exactly reinventing the wheel or digging through his legendary bag of tricks, often fictional, in order to sensationalize or further dramatize the subject at hand. That’s both a good thing and a bad thing. It’s a good thing because sensationalizing an already sensational true story is both unnecessary and, at a certain point, irresponsible when dealing in true events of the last few years versus those decades ago. It’s a bad thing because fiction and conspiratorial indictments of the highest order (JFK) are so often more fun than the truth. Fortunately for Stone, the truth is something akin to a conspiracy at the highest levels of government. And more than that, he has Joseph Gordon-Levitt when the goings get…can you call a true story predictable? I guess not. And that’s why I’m here. It’s reductive and frankly kind of lazy for a professional critic to label Snowden as toothless filmmaking whilst noting the subject’s own bravery and patriotism at the same time. Regardless, star Gordon-Levitt outdoes himself affecting the speech patterns and physical mannerisms of the man himself, never hamming it up per Stone’s previous stars nor allowing Snowden’s introverted self to render his performance too subtle for its own good.

Amply supporting him are Rhys Ifans as Deputy Director of the NSA, the devil on one shoulder, and none other than Nicholas Cage as an engineer cast off to his little corner of the org for asking too many questions. Obviously, the angel on his other shoulder. As long-time girlfriend Lindsay Mills, Shailene Woodley finally escapes the soapy angst of that Divergent series and lives up to the promise she foretold years ago in The Descendants, delivering a surprisingly understated performance herself. Their relationship grounds what could have easily been a tedious narrative of spooks and occasionally silly jargon, and Mills almost single-handedly prepares Snowden for the moral quandaries to come. When they first meet, she’s a flaming liberal and he’s a staunch conservative, hawkish on foreign policy and all. Through thick and thin, and things he’s sees under the cover of spy, that slowly changes. Ifans provides a small window into the other side of the argument, touting sixty years without a World War III as the preeminent reason for continuing to expand America’s own network of control. He almost has a point, and although that point isn’t vociferously explored, it’s a welcome reminder that Stone isn’t merely preaching to the choir here.

Snowden, despite its uninspired title and irregular sermonizing, is not a safe undertaking. Call me biased, but Stone and his team have crafted not just a biopic, but a galvanizing portrait of a country that desperately needs figures such as Edward Snowden less we decide our individual and collective liberties no longer matter. There’s patriotic fury inherent in a tale about one man who broke the law in order to reveal our own government was breaking the law every day…and we were the victims, maybe are the victims, depending on whether you believe the from-the-headlines codas or not.

One thought on “Snowden isn’t Safe”