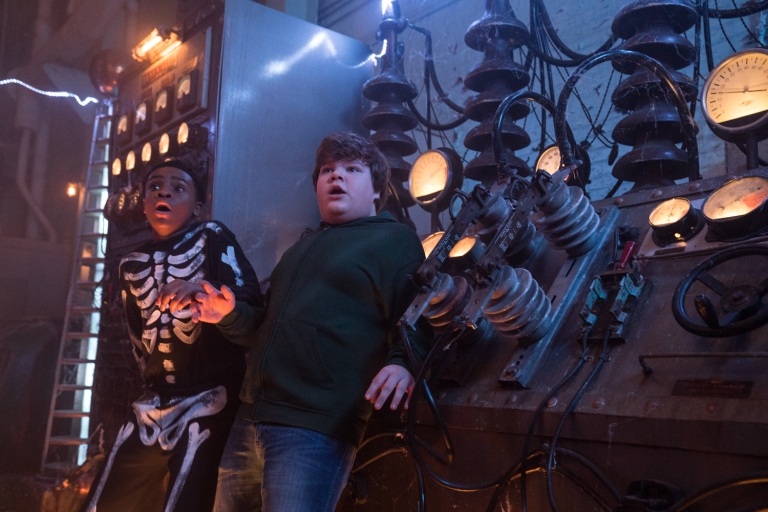 Besides the monsters, the true star, of course, is Black, an actor who knows exactly when to play it straight and exactly when to arch those flexible eyebrows. Assuming he returns, I wouldn’t mind a sequel at all, and given the ‘gotcha’ ending and so-far booming box office, we might be getting one anyways.

That’s what I said about the original starring Jack Black back in 2015. Be it scheduling snafu or simple bad decisions, I had a feeling Black’s role would be limited in a potential sequel, and so I was correct: the famed comedian appears for nothing more than a glorified cameo in the home stretch here, leaving the franchise’s campy shenanigans to a group of child actors (Jeremy Ray Taylor, Madison Iseman) and the ubiquitous Ken Jeong as a next-door neighbor hopped up on ole’ Hallow’s Eve. They’re mostly up to the task, much to my surprise, even if their characters are only occasionally charming. But what about the monsters? What about that colorful mayhem? I ixnayed on 3D, kay? So the action was less headache-inducing this time, if the horror more toothless, an issue not altogether problematic given that we’re talking kiddie fare, not killer psychos. Smartly, Director Ari Sandel keeps at bay the rubbery cartoonishness of the original and doubles-down on real costumes, animatronics, or competent doses of practical/CG combinations to portray the eclectic array of ghouls, goblins, and other evil entities. Between this and Hurricane Heist, it’s good to see filmmakers going practical again, no matter how silly their end goals.

Alas, I’m getting too technical. This is Goosebumps after all, a staple of my mid-90’s childhood and always good for some warmed-over nostalgia. From a punny dummy to giant gummy bears, scene for scene there’s plenty of fun to be had, often at the expense of unsuspecting citizens of the semi-fictional town of Wardenclyffe, New York. Ostensibly the location of Nikola Tesla’s infamous tower for wireless electricity, Sandel and co. utilize the lore of Tesla’s great inventions for goofy plot mechanics that turn everything Halloween, from pumpkins to store-bought decor, into a walking, flying, or fire-breathing creature of the night. The biggest hoot of all is Slappy, the mischievous dummy back for revenge and for…family? Yeah, turns out the dummy has a wee heart underneath all that wood. In fact, they might have had a meaty twist on their hands had they continued the second act curiosity of partnering Slappy and the two kids for pranks and near-hysterical middle school hijinks. And there’s a nice ring to a Slappy and R.L. Stine buddy comedy, like Ted with a dummy. That could’ve been something. Woulda, coulda shoulda.

Haunted Halloween is still something of a corny good time despite the missed opportunities, rehashing of plot, and lack of Black. If your kids have a soft spot for pretend scares, gummy bears, and everything Halloween, take them to a matinee. It’s toothless, but harmless, and not a complete waste of time.