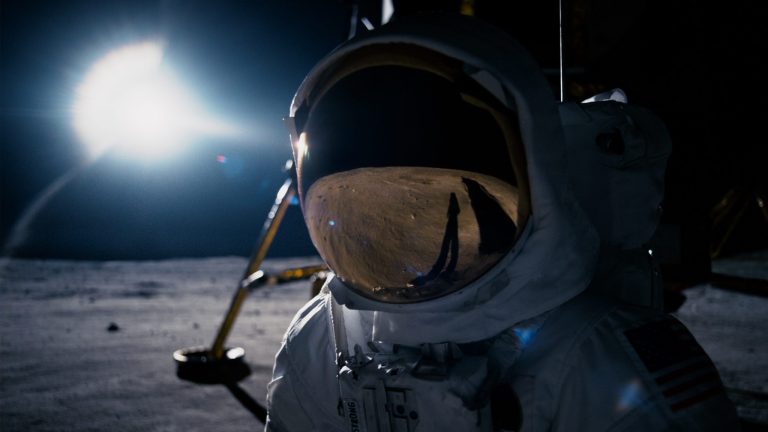 Damian Chazelle’s First Man is about the mission, sure, but it’s really about Neil Armstrong. It’s a first-person point of view flight simulator, putting you smack dab in the middle of a groaning space shuttle made of nuts and bolts and sparking wires just ready to start a fire. It’s a testament to those astronauts who brave the creaking possibility of imminent death around every corner when testing, re-testing, and ultimately defying our limits as a species. It’s a study of man’s thirst for more through the prism of one man who just wanted to let go of someone, to see things he should have seen a long time ago.

Neil Armstrong is not your typical protagonist. He’s a roiling calm of internal, traditional masculinity as was typical of a man born in the thirties and raised in the forties. No heart on his sleeve, he wears it ten meters deep under a slew of baggage, not least of which is the death of his young daughter. Gosling’s performance is reliably intense, palpably so, and not a staring contest as some accuse him of and as some actors resort to when they’re not sure how to convey inner turmoil. His Armstrong is one of maniacal determination for reaching that man in the sky, that farthest of heights imaginable, often at the expense of his dutiful family. Claire Foy manages to transcend the supportive wife trope, making Janet not a victim of neglect but a willing participant so long as Neil doesn’t cross the line, and when he does, she’s there to tell him what’s going to happen lest he regret ever stepping foot off the earth. She’s the immovable object to his unstoppable focus, his unsolvable grief. With the exception of Jason Clarke’s Eddie White and Kyle Chandler’s Deke Slayton, other engineers and astronauts are relegated mostly to the background, although Corey Stoll gets a smarmy line or three as Armstrong’s outspoken antithesis Buzz Aldrin.

Utilizing 16mm photography for everything but the moon, where IMAX is employed to spellbinding effect, Chazelle is the star here. His lightweight camera captures the back-room politics and space race engineering in all of its painstaking glory. In fact, the heyday of NASA doesn’t look glorious at all, it looks grueling, like the job of workaday men with the weight of Russia and “those idiots in Congress” on their shoulders. They grapple with the unseen shadow of Vietnam, the unspoken throng of a war for civil rights raging outside, poet Gil Scott-Heron proclaiming “Whitey on the Moon,” an anthem used here to depict such a dissonance between NASA’s own perseverence and the passion of Americans protesting what could be taxpayer dollars completely wasted. Most of all they grapple with the spectre of death, their colleagues perishing in one failed test after another. These are the hush-hushes of a story often sugarcoated for classrooms and codified myth-making. Chazelle doesn’t sugarcoat, nor does he deify them, particularly Neil himself. Going handheld, he also captures the backyard and bedroom tensions of a family torn asunder, first by grief, then by the eyeballs of an increasingly garish media presence, invading their home for photographs and pull quotes.

It’s ironic that conservative media have taken to bullying First Man for a lack of patriotism, when it’s the most honestly patriotic film you’re likely to see in quite some time. It’s the quiet, unassuming kind of patriotism, much like Armstrong himself, the kind that acknowledges we’re privy to a bigger planet than ourselves, our little neck of the woods. “You’re down here and you look up and you don’t think about it too much, but space exploration changes your perception. Allows us to see things that we should have seen a long time ago.” To see that we are not races or creeds, gender or religion, we are one race of mankind, that we are not so different, that our partisanships have pulled us down to earth, and not in a good way; in the way that says you’re not American if you ain’t loud, brash, and lewd with your brand of flag-waving. It’s “one small step for man, one giant leap for mankind” after all. Screenwriter Josh Singer and co. knew that when deciding what to show and not show, what to soar and not soar. Our moon landing was no feat of patriarchal colonialism, but the hard work of many collective bodies, both warm and cold, and for Armstrong, a feat of perseverence in the face of emotional turmoil.

Damian Chazelle doesn’t need a flag planted to the swelling trumpets of “American excellence.” He puts you in the shoes of Neil and every man, woman, and monkey who ever made that perilous trip, simulating the rock ’em sock ’em chaos of space flight circa 1969 and, eventually, the surface of the moon itself in vivid IMAX photography. Chief of all, he and Josh Singer have done it all as seen by a lonely, grief-stricken father of two and husband to one. First Man is an ode to the man and his trauma, as well as a visceral flight simulator of historic magnitude.

One thought on “First Man is a Flight Simulator”