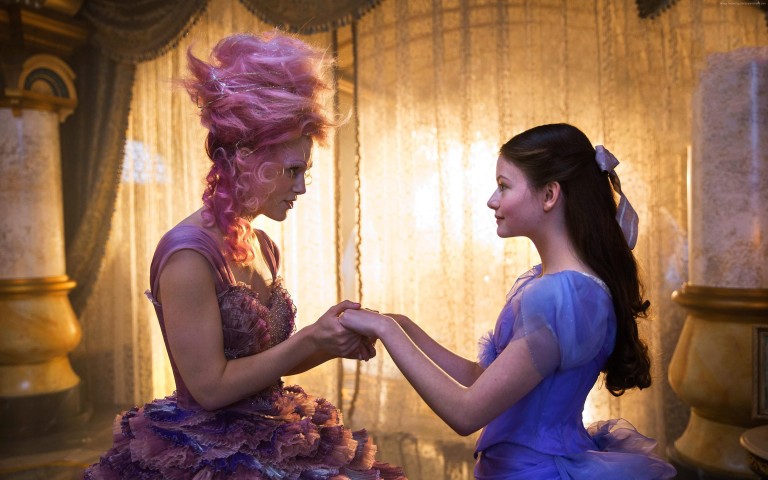 Lasse Hallstrom and Joe Johnston are directors of the classical sort, unassuming in reputation and unafraid to be “sentimental.” That word is frowned upon in film critic circles, a means of telling readers they shouldn’t feel or telling filmmakers they shouldn’t try to make you feel. Not too much anyway. It’s a word I’ve used to conjure those same thoughts, to point out the treacle and the tasteless, but no longer…the problem isn’t sentimentality itself, the problem is music. While their storytelling may be fraught with many distractions for the kids, like nearly anthropomorphic mice, or for the not-so-kids, like a disturbing flock of mice moving in unison, Joe and Lasse know how to build a set, build a scene, and build a musical crescendo. Incorporating classic Nutcracker numbers and expanding on them to encompass a corporate plot of doomsday machinery and war among the four realms, James Newton Howard transcends the Disney machine’s unfortunate limitations. Try as they might, the Mouse House’s formulaic intentions were no match for his long dormant talents. No match for the nostalgia of Christmas, complete with sepia suns and silky snows, or for a cast like this, with Mackenzie Foy a child’s delight and Keira Knightley stealing the show as a squeaky-voiced crown regent called the Sugar Plum Fairy. Dear veterans Morgan Freeman and Helen Mirren provide a proper twinkle, a dash of warmth in the midst of so many well-rendered but random attractions. Eugenio Derbez and Richard E. Grant as other regents of the crown are just the cherry, flower, or cheery snow on top.

This is no repeat of the oft-ridiculed Alice in Wonderland, for this actually delivers on the promise of a visual and aural experience, even if troubling fantasy tropes and even more troubling images (miniature clowns that belong in morbid horror) often get in the way of that experience. It’s a sweet little nut of simple pleasures, surrounded by a company’s tired coating. It just took James Newton Howard to crack it.

One thought on “The Nutcracker is a Nut of Simple Pleasures”