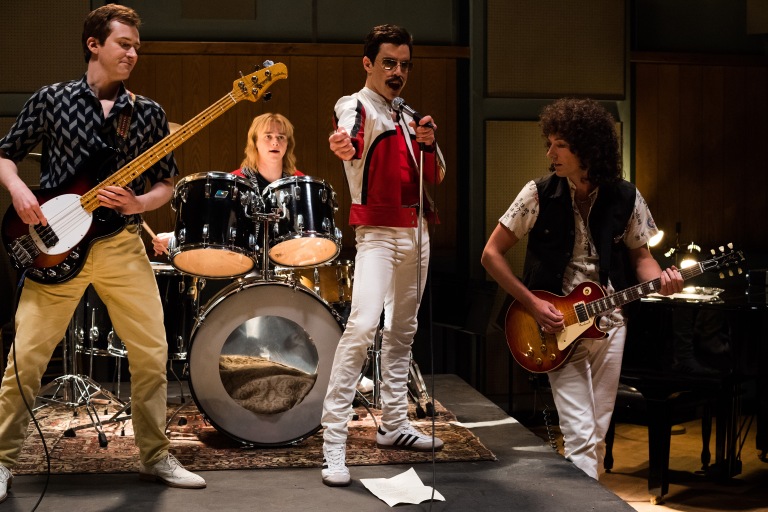 As a fictional composite of fallow record executives, Mike Meyers is Ray Foster, a money-grubbing dinosaur chafing at the bit to denigrate Queen’s new single “Bohemian Rhapsody,” an operatic work of art at six minutes and change and over the top of anything ever produced. Foster says “I like formula.” He’s stuck in the mud of past civilization, imagining a culture where sixteen year-olds roll down their windows to catchy tunes of traditional, conventional rock n’ roll and only such. Rami Malek’s Freddie Mercury and other members of Queen chafe right back, telling Foster they’ll quit him if he doesn’t acquit their song, and when he doesn’t…they walk right out and whirl a rock through his office window.

It’s clear director Bryan Singer did not heed the band’s rebellious machismo, their willingness to stand to the man and say “we are not formula.” With input by Roger Taylor and Brian May, Bohemian Rhapsody is exactly what the band always stood against, that most wretched of things: formula. It’s entirely that one thing you fear any time they announce a musical biopic, the life story of their greatest hits, the rudimentary beat for beat copy of that plot as old as time, the rags-to-riches-to-ragged-partying. There’s even the one man who maneuvers into Mercury’s life, manipulating him and eventually isolating him from all he cares about. There’s always that evil cling-on, the snake who gets tossed to the curb for slithering so good, not to mention the inevitable media circus malaise, here with Mercury facing noxious reporters posing all sorts of nebulous, personal questions. And there’s a fall from grace, precipitated by drugs, sex, and otherwise deviant behavior. Singer comes close to relegating Freddie’s queer sexuality to the fringes of such behavior, as if it were the cause of his downfall, odd given Singer’s own queerness. Nevertheless, gay hero and hunk o’ love Jim Hutton enters Freddie’s life to put some of those doubts to rest, although an R-rating would’ve done wonders in alleviating many accusations of homosexual chastity. Whether you’re a Freddie Mercury neophyte or a long-time true believer, you get the feeling this is one extremely short-handed point of view of true events, a story told mostly from the point of view of those surviving members. From merely skimming music history I can tell you Freddie was not the first of them to run solo, nor was he the only man in that band to face retribution for his vices. But Taylor and May had other ideas I guess.

Believe it or not, the dreaded formula isn’t always a detriment, in the back half serving up pathos in the form of heart-to-hearts from Mercury to band members and poignant reminders of the other love of his life that he lost to fate. Much of that is thanks to Rami Malek, a performer whose mimicry as Freddie Mercury is buoyed by a set of eyes more expressive than any song. He carries the film through a series of formulaic bullet points, through the rough patches and smooth edges, often sanded over for mass consumption. While he’s nowhere close to Sacha Baron Cohen in the department of dead ringers for Mercury, his performance is wrought with feeling and power, especially in those musical sequences, however brief they might be. Strangely, Singer and producer Dexter Fletcher chose to cut away during each and every live performance, all of them ringing hollow until we’re finally treated to a mammoth show we deserve. Live Aid, the concert to end all concerts, is an emotional climax the likes of which we’re accustomed to watching, but never grow tired of in this genre. Despite short shrift, the cast makes the most of their time in the sun or shadows, adding feeling to a script that has little time for that. Apostle‘s Lucy Boynton continues an up-and-comer’s streak of escalating challenges and pulls off the thankless task of Mercury’s first and only wife, a character pushed to the sidelines, much like Mary Austen herself. And while we don’t learn a damn thing about them beyond their college major and few character traits, Joseph Mazello, Ben Hardy, and Gwylim Lee make endearing impressions as John Deacon, Roger Taylor, and Brian May, respectively.

Forget the tabloid scandals and tawdry moral quandaries, for most of a long career Bryan Singer has not been one to embrace formula entirely. From The Usual Suspects to his quieter-than-expected X-men pictures, to a Superman film steeped in longing and melancholy, he’s often eschewed the usual for the unusual when tackling different genres. Unfortunately, since that financially dubious Superman he’s begun to embrace formula more and more, beginning with the mediocre fantasy trappings of his Jack the Giant Slayer and now culminating  with the pure thrills and purest beats of musical biopics in Bohemian Rhapsody. It’s even more unfortunate given the subject here, a man and band that spat in the face of such banality. He’s only fortunate that Rami Malek and an amiable cast have come along to give it a minor spruce of life anyway.